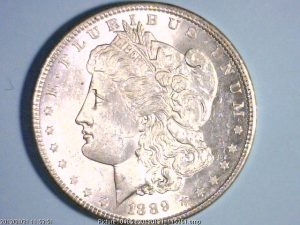 Morgan silver dollars are a very popular collected series of U.S. coins. Issued from 1878-1904 and 1921 they are the largest denomination silver coin issued by the United States Mint. Completing a set in circulated condition (without the 1895-P) can be completed by the collector on a budget from $7,000 to $10,000. For a well financed collector, the skies the limit for a set in uncirculated condition. A basic set would consist of 95 coins not including the very expensive 1895-P and 10 others “specialty” coin such as overdates and varities. A set of 95 coin would include coins from 5 mints: Carson City, Denver, New Orleans, Philadelphia, and San Francisco. The most difficult (pricey) coins to attain in this series are the coins dated 1893, 1894, 1895, and the silver dollars issued from the Carson City, Nevada mint and the 1903-O. Many collectors obtain the inexpensive coins first and then give up on the set when discovering the expense for the last 23 or so coins. The contrarian collector might strategize to obtain the most difficult coins first and then obtain the lesser expensive remaining 72 coins. I hope you enjoyed this blog. Good collecting!